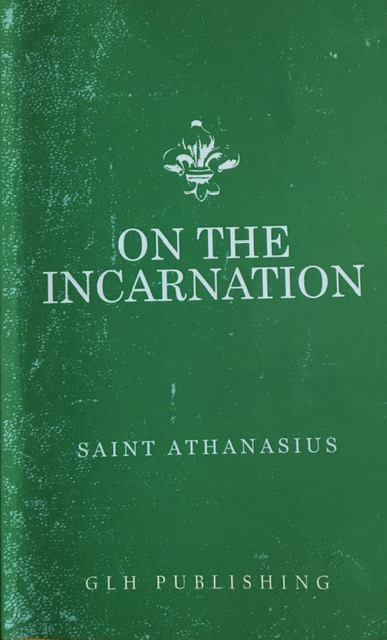 Alright, this book was a nice little help. Short and sweet and while it read well, the print and spacing were a bit harder on me. Maybe it’s because I’m getting older and my eyes don’t see so well.  It just took a little longer than I would have liked. But hey, some things you have to endure through.  This, of course, was another recommendation and it fits right in with what I have been meditating and teaching on here at the church – The Incarnation.

So we before we talk about the book, who is Athanasius? Anthanasius was an apologist out of Alexandria Egypt who defended the biblical doctrine of the Trinity (Godhead) against Arian Heresy in the 4th Century.  Arius taught that Jesus was a created being—the first thing created—not the eternal Son of God. He did not believe Jesus was God.  And while this is a fourth-century heresy it is still very much prevalent today in the many Christian cults extant today. I would go further to state that other heresies concerning the Incarnation are creeping into mainline denominations including Baptist circles. The onus of this problem falls in the lap of the preacher.

Anthanasius’ other works include The Life of St. Antony and Four Orations Against the Arians.

Those who know me and my preferred reading know I like the older authors. They have bit more depth, originality and they’re a good source regarding the origin of a thing (s). This book while translated in English the material is still considered old, but relevant. The forward by C.S. Lewis articulates my position on why we should search the old writers and in this case older apologists.

In the forward C.S. Lewis, puts forth arguments on why ancient authorities should be consulted. Covering the modernistic errors coupled with the older writings, the trepidation of modern scholars in reading older works for fear they won’t understand it, etc. He cautions those who want to stick primarily with the new that, “for every modern book an old one should be read after it.” In theology and church history I think this is important. Many of the modern works pick up only bits and pieces of the old only with a modern twist included, hence his statement that “the only palliative is to keep the clean sea breeze of the centuries blowing through our minds, and this can be done only by reading old books”

The book is short with only eighty-five pages. The content wasn’t in the least philosophical or deep as some apologists tend to be. It was, as I like to say, over the plate and waist-high. There are nine chapters plus a chapter on the life of Athanasius. Having a background on the life and times of some of these men really helps to put things in context. Church History in of itself is a worthwhile endeavor and will yield large amounts of info, covering, the cultural considerations, political and spiritual conditions of the day. The context of these heresies and those that withstood them helps to understand the sacrifices made by many of these men

The chapters range from the Creation and the Fall to the Divine Dilemma and its Solution in the Incarnation, then covering the Death of Christ and the Resurrection. The remaining three chapters include a refutation to both Jews and Gentiles for their unbelief in this regard and then the conclusion.

The standout chapter for me was the Divine Dilemma. These two chapters picked up where the fall left off, man because of the depravity and corruptness of his nature was on the fast track to total destruction. God’s creation was in ruin! What was God, who was good, to do? The answer, He offered up himself to take the place of man in order to redeem him and creation from complete annihilation. What a testimony of his grace and mercy towards creatures who didn’t in the least bit deserve it.

These chapters (while they were all good) fed into and nurtured what is already going in my spirit and even more so at this time of the year as we remember and celebrate Adventus Christi, the Perusia of Christ.

It was a worthwhile read and contained a lot of helpful thoughts and some new ones as well. I appreciate the organization of his arguments throughout leading up to and including the incarnation and the defense of it in the latter half of the book.

Well as they say – arivaderche’