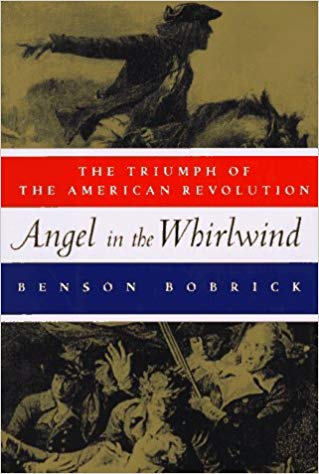 I just finished this most excellent book on the American Revolution and not the least bit disappointed! This pivotal period of America’s history has taken hold on me and the more I read the more in awe I am that the colonists won. Divine Providence is witnessed throughout. Against seemingly insurmountable odds they persevered through all kinds of hardship and setbacks. Many were their defeats and yet many more victories. These soldiers, General Washington, and other leaders went without pay, food, adequate clothing, shoes, and supplies to fight an effective and efficient war.  They faced betrayal, desertions, disease, hunger and some of the harshest winters any human should be expected to endure.

While this is my second book on the subject of the Revolution I found the details in this book to be a game-changer. The little things including the author’s laying the groundwork leading up to the Revolution particularly helpful. For example, by the author’s covering of the French Indian War, you are given insight into the type of leader that Washington was even at the age of twenty-two. It also paved the way for understanding the tactics used by the militia and Continental Army. Often referred to as guerilla warfare the colonists had learned to adapt to the tactics used by the Indians when fighting them. They used these methods with great effect when fighting the British. By covering early colonial life you were given an insight into the general mood and sentiment of the people. A storm was brewing in what later becomes the American Revolution.

The book reads extremely well and again you drawn into the personalities, conflicts and the extreme harshness of war. Such was the author’s style of writing and detail that the next step for me will be read the accounts of the various figures and battles that took place throughout. Surrender of Cornwallis at Yorktown, Kings Mountain, Cowpens, Valley Forge, Bunker Hill and one other book written as a firsthand account from a soldier in the Continental Army are my list of desired reads, at least to start. O’ yes and Cato, Cato was somewhat of an inspiration to the founders and a play based on Cato was used with great effect by General Washington at Valley Forge.

Well time to close this brief review out. Have a great day all!