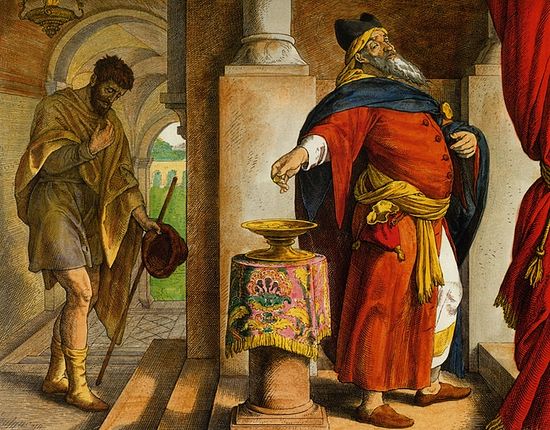 Wasn’t sure how to segue into this blog, after being in ministry since ninety-five and serving pretty close to my mentor for a better part of ten years, I’ve come to terms with the harshness that is often found within the “camp”.

The older I get physically (perspective changes) and spiritually the more I realize how destructive a self-righteous spirit can be to a local church assembly and particularly to new believers or those who are weak in the faith.

There have been cases where seasoned saints, the ones who ought to know better, assume a pharisaical priggishness and with an overbearing, overlord like spirit begin to oppress those who do not meet their self imposed, unbiblical, un-Christlike standards. Even when emphasizing that which is right the spirit that it is sometimes done in is cruel and unyielding. This is certainly not the way Christ is towards his heritage. Given our tendencies and shortcomings, Christ shows way more patience and mercy to the brethren than many are willing to admit.

This type of spirit is crushing to the weak in the faith, to the unlearned and especially the babes in Christ. It is counterproductive to the work of Christ, unbiblical and unnecessary.

The results – if left unchecked – it can have on the individual himself can have lasting effects as well. It adds more fuel for an already self-righteous spirit; makes you harsh, bitter and cruel. It also gives them the sense that they are superior to others. Pride and self-worth are elevated while those who do not measure up are looked down upon. You will note in the parable that the Pharisee uses “I” five times in his prayer. A lot of focus on self!

The after-effects lead to a discontented, legalistic spirit. The focus is on how they think others should carry themselves, and what a “true” Christian should be like, and very little if any time is spent on self-reflection. Often these folks will move on so they can be a “blessing” to another church and then on from there and the vicious cycle continues

I’ve seen this far too often in the area of “standards”. I’m not arguing against standards. To maintain decency and order in the local church one can clearly see their role, but they are in no way an accurate measure regarding the depth of someone’s spirituality.

I’ve dealt with those over the years who set themselves up based on their conformity to certain standards or the assumption that they’ve somehow arrived. Very critical and judgmental towards those who are not in lockstep with them on every little detail. Hardly the Christ-like spirit you read about in the word of God. Often when I am presented with a dispute between brethren over something menial I will ask how would you like Christ to react to you if you were guilty of the offense? Usually, the matter is resolved to a nothing burger.

For the record, EVERYONE has standards, even those who boast about having no standards fail to realize that that is, ipso facto, a standard!

The parable of the Pharisee and Publican is a perfect contrast of the right and wrong kind of spirit. By way of biblical example we see in the publican the proper view we ought to have about ourselves -be merciful to me a sinner- and where our attention ought to be- towards the God of all mercy and grace.

The Pharisee based his level of righteousness (things he had done) on the sinfulness of the publican. Thinking he had arrived in his manner, dress, and righteousness, thinking he was somehow superior, he spoke against the publican before God.

The publican on the other hand, who could not even look towards heaven, could only beat his breast and confess his unworthiness before God. His manner while appearing unrighteous in front of the Pharisees was one of humility and repentance before God, much in the same line as Paul when he cried out “O wretched man that I am who shall deliver me from this body of death?”  This is the spirit of self-reflection and humility that honors God and restores the sinner.

While preaching through Romans I’ve noticed in the later chapters the emphasis on how the brethren are to be towards each other and on a united front, one mind, one heart, and one voice giving praise to God and giving glory to his name.

The saints have a biblical responsibility to treat each other with the same care that God treats them. Take note of what is said here in Paul’s epistle to the Romans 15:5-6 –

“Now the God of patience and consolation grant you to be likeminded one toward another according to Christ Jesus: That ye may with one mind and one mouth glorify God, even the Father of our Lord Jesus Christ.”

Is God not patient with us, does he not offer us comfort, forgiveness, mercy, and grace? Of course he does and likewise, we should be the same way one towards another?

And note the intent – “THAT YE MAY”! In other words, I believe the scripture is telling us that if there is anything less than, or counter to, these qualities, the local church body cannot glorify God. It’s too self-consumed with division, and discontented believers to do that! A self-righteous spirit will hinder a church and or believers from growing. Paul goes into detail on this with the church at Corinth with all their division and such.

Love and charity are repeatedly addressed throughout the epistles and the burden to display theses qualities lies squarely in the laps of the people of God. We should know better knowing what we were graciously delivered from.

Well anyway, time to sign off, may God be praised and his word preached among the nations. – Tim