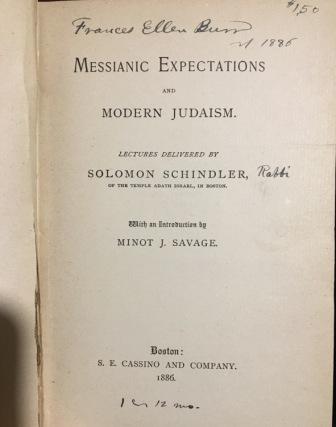 This was an interesting read, not quite what I expected, a bit of a surprise, but informative nonetheless. Why did I read this book? It was recommended by my summer intern. He said someone had recommended it to him and he thought it would be of value to me. Since I read just about anything I can get my hands on I thought I would give it a go, besides it only cost me a buck fifty so what could I lose. You can’t even get a coffee for that today.

While the bulk of my reading is spiritual, and within the context of my system of beliefs, I do like go outside those boundaries from time to time. It helps me to gain a better understanding of alternate views and helps polish up my arguments. Sometimes we think we know it all and then something comes along that belies our core beliefs. This book certainly offers up its challenges.

This was written by Solomon Schindler a Rabbi giving his perspective on world events, religion, rationalism, Judaism and the future of religion. THIS WAS WRITTEN IN 1886! I had to remind myself of that while reading through it as many events especially those of 1948 and the state of affairs with religion in general have changed quite a bit.

The book is written in two parts with the first part covering his views regarding religion with an obvious critique on Christianity, and the second section leaned more into his view on the future of  a universal religion and with underlines support of Judaism as being the purest form of religion and closest to “The God Idea”

I called the two parts, Problem with Religion and The God Idea.

As a book written by a Rabbi who didn’t believe Christ was the Messiah it also follows that he denied the veracity of the divinely inspired scripture. He stated that “the books of the Bible are to me, as they are to every intelligent man to-day, products of human, and not of divine, authorship.” Pg19 Like rationalists from all ages to them it’s just a book penned by human hands and therefore unreliable as a historical and spiritual resource. Once this has been established pretty most if not all of the biblical narrative is brought into question.

The chapters regarding pseudo- messiah’s was something I have never come across before in my reading. Given the fact there are many false – messiahs, even today, it should come as no surprise His argument was that since there were pseudo-messiahs Jesus Christ must also be one.

The key figures mentioned were: David Rubeni, Solomon Molcho and Sabbatai Zwi.  All who capitalized on the fears and superstition of the people. He believed their rise was do to the “unhealthy [political/social] conditions; and the sicker the national body grew, the wider spread and more intense the mania” He believed the expectation concerning the messiahs was a political one and with the abysmal political climate the hope was even greater. Folks were easily deceived because of this expectation. I will say this, had they believed the New Testament narrative concerning Jesus Christ they would not have been so easily duped.

One of my annoyances regarding historians of Church History is their failure to differentiate between Romans Catholic and non-Catholic sects. Not all were barbarians and not all were responsible for the martyrdoms of so many, including many Jews. The author made no distinction and pretty much lumped all Christian denominations together. This became his point of contention particularly with the persecution of the Jews by Roman Catholics.

This quote is in the conclusion of the first section – “The religion of the future will be neither specifically, Jewish, Christian nor Mohammedan. It will be an entirely new system in which the immortal parts of all the present religions will be represented…” pg166

This section introduces his thoughts on the Pittsburgh Platform an event he could not make but fully endorsed. Wiki has some info on this as well. An interesting read and again from a Jewish perspective and is what I believe to be the pillar for the God idea.

“The theory of evolution adapted to the God idea places us far above our ancestors, and suggests the hope that future generations will come still nearer to its true conception. It further grants to every individual the right of defining God as he pleases and is able to;… and is the basis for a universal religion, for the religion of humanity” pg190

The way I see it the climax of the book was to put forth his “God Idea” Again once the authority of scripture is undermined and once that’s done the field of interpretation is wide open.  The God idea (people can make up what they want about him)  is not  biblical is certainly not biblical. Funny the man critiques the bible saying it was written by man and yet puts forth and promotes the God idea, which ironically enough is the by product of a depraved man.

My take away from all this is to just stay in the book, believe the book and preach the book.

I’ll end it here, the author believed that when the dust settles r Judaism will find “again its proper place and in a more settled shape – the only religion fitted to survive” pg 215 Well that’s all folks!