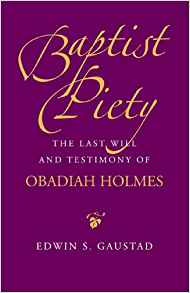 I borrowed this book a couple of years ago from one of the guys at the church and I am just getting around to it. I wonder if he’ll want it back? It really was a great little book. Depending on your reading habits this could be read in a couple of days.
The main theme of the book is of course Obadiah Holmes a Baptist (and disciple of Dr. John Clarke) who lived during the 17th century. If you’ve ever read Baptist History you would have at some point come across the account of his arrest and subsequent whipping. In fact the only images 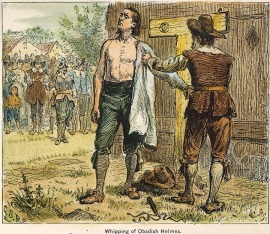 I know of this man are those associated with the whipping post.

While I have not read every Baptist History available the ones I have read cover very little details concerning his life. This short bio covers those areas and for that reason alone I would recommend this book. I’ve said this many times in the past, reading about the faith and trials of those who have gone on before us is both humbling and enlightening. I strongly encourage folks to read the biographies of these great defenders of the faith.

The Features of the Book
The layout of this book is simple; it’s just two parts. The first section is titled historical section providing an interesting backdrop to his life, covering his modest birth, upbringing and his “rebellious” stage. The details concerning his testimony are akin to many I’ve read from that time period and during the Awakenings, with the exception of Finney of course. Also covered is the spiritual and political climate leading up to and following his salvation.

The second section title Last Will and Testimony really makes the book worth the read. This section gives a peak into the heart of the man. The scripture states out of the heart the mouth speaketh and so it was with Obadiah Holmes. In his own words in speaking about scriptures and experience, “What more is needed?” His testimony is that “the experiment works, the gospel works: I have found it made good of me. God also faithfully works: I have ever found Him as good as His word, and promises never failed me in any difficult time.” pg 71

There is no doubt as to what his theological/soteriological leanings were – Calvinistic! There is a list almost like creed which he had agreed to. This gives a better understanding to where he was coming from as well as others particularly John Clarke.

This section is broken down into five areas and all of are a reflection of his faith towards God and the faith he encouraged in others, His testimony to the world was in strong language charging them to get right with God.

Written towards the later days of his life there is sincere and heartfelt mood seen in each of them. This is a very unique glimpse into his life. Interesting how in today’s world so much focus is on stuff and success and here we read about a man’s genuine concern for the spiritual well being of his family, church and the world. I’ve included what I consider to be salient quotes from each section.

1) Testimony on his Life – Under conviction concerning his rebellion to his parents while hearing the word preached, “…every word that was spoken was against me and left me without hopes of any mercy.”

2) Testimony of His Faith Before giving his testimony of things he believed, he stated, “I cannot forget the rock out of which I was hewn and the cistern out which I was digged. I was by nature a child of wrath as [much] as others… but God had mercy on me in store when I neither deserved or desired it.” pg 87

3) Testimony to His Wife – “The consideration of this causes me to put thee now in mind, when I am removed, to consider Him as thy husband, as thy father, as thy Lord and Savior who has said that whom he loveth, He loveth to the end.” pg 97

4) Testimony to His Children – “Beware that you hearken to any that shall speak contrary to Scripture… Let your conversation and life be squared [living our life squared by the scriptures, good rule to live and die by] by the same, and they will direct you how to behave yourselves toward God and man.”

5) Testimony to the Church – “Pity sinners; beseech, intreat, persuade them to be reconciled to the Lord – remember such were some of you.”

6) Testimony to the World – “As the Lord says, There is no peace to the wicked. So long as you continue in that state, you may expect nothing but fierce indignations of the Lord and, as you are an enemy to Him, He is your enemy. It is a fearful thing to fall into His hand…” Pg 116

The last section includes his will and inventory and how his estate was to be handled. Interesting how little folks had then compared to today’s healthy lifestyles.

What Was the Big Take Away?

When offered bail for his release Holmes refused. Cotton Matthers in his rebuttal to Clarke’s Ill News from New England stated this all fell on Holmes because he made the choice to be whipped when he could have been set free. After reading this I understand a bit more on why Holmes went to the whipping post, to him it was a principled thing based on his religious convictions. He was that close to God in his walk that he saw no other alternative that would have satisfied his conscience.

In our day and age we give up a whole lot more for a whole lot less. To many their faith in Christ isn’t real, there is little substance and the connection between them and God is weak. Reading these types of biographies really puts things in perspective for me and offers up renewed challenge as I draw closer to God in life and word.