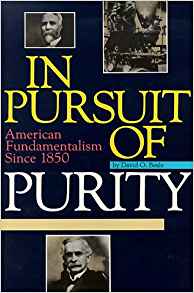 This review was done about five or six years ago

Summary:
This book is a clarion call for all those who are truly interested in Fundamentalism and its roots in America. The author takes us on an intriguing journey detailing the men, the movements and the struggle of various Fundamentalists as they tried to maintain their steadfastness in keeping the integrity of true biblical doctrine.

This is an engaging work, making it palatable for the all those who read it. The information is easy to assimilate and noteworthy. Because it is both informative and educational it makes a great reference work and a welcome addition to any preacher or historian’s library.

Critique:
The author’s objective is to “qualify” the definition of Fundamentalism in the “changing context of American history.”pg3 Thus begins our journey with him as he outlines key figures such as, P.P. Bliss, James H Brooks, C.I. Scofield, D.L. Moody, Billy Sunday, Lyman Stewart, J. Gresham Machen, W. B. Riley, Ian K Paisley and many, many others. He traces the roots of Fundamentalism back to the great Niagara Conference. What follows from there is a detailed account of Fundamentalism’s struggle against the changing tides of Liberalism/Modernism and the wearisome efforts to get a foothold the minds and hearts of the people . I see very little of that struggle here in the Northeast. Is it worth the fight? I believe it is. J Gresham Machen stated in 1923 that,

“The type of religion which rejoices in pious sound of traditional phrases, regardless of their meanings, or shrinks from “controversial” matters, will never stand amid the shocks of life. In the sphere of religion, as in other spheres, the things about which men agreed are apt to be things that are least worth holding; the really important things are the things which about which men will fight.” 1

What follows are three areas the liberals used as weapons against the fundamentalists. These same weapons are being used today and they are producing the most lackluster, unbelieving Bible critics ever to walk the face of the earth. Although my comments are brief it should be noted that with careful study you can trace the reason for many of the failing churches today back to one, if not all three of these areas.

1. Darwinian Evolution – The idea of theistic evolution was taken into consideration by many. It was not until the Scopes Trial of 1925 did things really heat up about evolution. After the war evolution was vigorously opposed by William Jennings Bryan, Billy Sunday and William Bell Riley. pg 81

2. Comparative Religion – At the time this did not play as prominent role as evolution and Higher Criticism, but did nonetheless. It was stated that after Darwin read the arguments from comparative religion he began to doubt Christian orthodoxy. This holds true even today. With the multiplicity of world religions many are adopting the belief the God is the Father of all and it makes no difference what one believes as long as they are sincere. Hell is full of sincere people.

3. Higher Criticism – Issues surrounding Mosaic authorship of the Pentateuch, the integrity of the book of Isaiah, the authorship of the Psalms and the date of Daniel were just a few of the items. The Revised Version of the Old Test brought the whole issue before the public. This Revision became a dead issue very quickly because the King James maintained its popularity. pg 82-83 Higher Criticism is destructive!
The author conveys in his writing that history is his bailiwick and more importantly his emphasis on historical accuracy. It is apparent that he is an aficionado of Fundamentalism and would certainly hold to those truths that his predecessors fought so valiantly for.

The writing style is easy to grasp and captivating. The format is easy and the “For Reference Only” in the back of the book was of particular interest to me. In that, he briefly defines the various organized religious groups such as the American Baptists, Baptist Bible Fellowship and Southwide Bible Baptist Fellowship etc. The information is general, but informative nonetheless.

There is an extensive Bibliography and index. The title, “In Pursuit of Purity” tells the story of Fundamentalism’s quest to uphold the word of truth and maintain doctrinal integrity.

Personal Response:
In trying to capture the salient points of this work I found great difficulty. Being somewhat passionate in this field of study, not to mention my growing convictions in Fundamentalism it was challenging to lock in on a specific area. Having said that, I will address something that was exigent to me; the author writes, “Virtually all religious movements have diminished in vigor and strength of conviction. Truths once held dynamically came to be held only formally.” pg 356

Strength of conviction is paramount for the Fundamentalist in these waning times. While Modernist/Liberals misprize the doctrine of the atonement, the Bible’s inerrancy and miracles, we must pursue with vigor true Biblical doctrine. We can no longer look askance at the Liberal’s attempts to undermine the historic doctrines of the faith, but rather scrutinize with all assiduousness those that opposed themselves and true doctrine. (2 Tim 4:2-5)
1 Christianity & Liberalism ~ (J. Gresham Machen) 1923